You´ll find no other Buenos Aires neighborhood that reflects so perfectly that the city is a frantic, chaotic, unpredictable place. At first glance it´s easy to become overwhelmed with the infinite mass of office workers, taxis and buses-horns! That move around during every weekday. They make up the urban symphony on which everything else is added: vendors, men offering to exchange foreign currency, and some great “street performers”...

But beyond the initial chaos, there is a parallel reality that coexists harmoniously with sound and fury. It´s the typical scene with locals sitting in a bar drinking coffee and reading the newspaper; or watching hypnotized the replay of a Sunday football game on television; or talking to the waiter about politics. Or -why not- leading on the window resting the view, with mind lost in some other corner...

DOWNTOWN: A TOUR THROUGH A VITAL NEIGHBORHOOD IN BUENOS AIRES.

Flora and fauna of downtown are as eclectic as captivating. If you close your eyes and imagine that about 250 years ago there was little or nothing in the Pampas land is difficult to imagine what surprised the conquerors. Still, they tried not once but four times. And today, the Obelisk, the highest city icon reminds us that first failed founding in 1536. Elegant and arrogant with 67-meter high, it´s curious that was widely criticized when it was built-in the record time of 31 days-in 1936. In fact, three years later, Mayor Arturo Goyeneche prevented the Obelisk to be demolished despite widespread criticism.

As any cener of the universe-a mentality which is often attributed to Buenos Aires people-, the Obelisk marks the beginning and the intersection of many major roads in the city: the Corrientes Avenue, with its string of theaters, book shops and pizza stores, all equally unmissable; Presidente Roque Sáenz Peña Avenue, leading directly to the historic Plaza de Mayo; and the emblematic 9 de Julio Avenue, the widest avenue in the American continent, where, in addition to find the unique Colon Theatre, you can enjoy one of the most picturesque sunsets of the city. 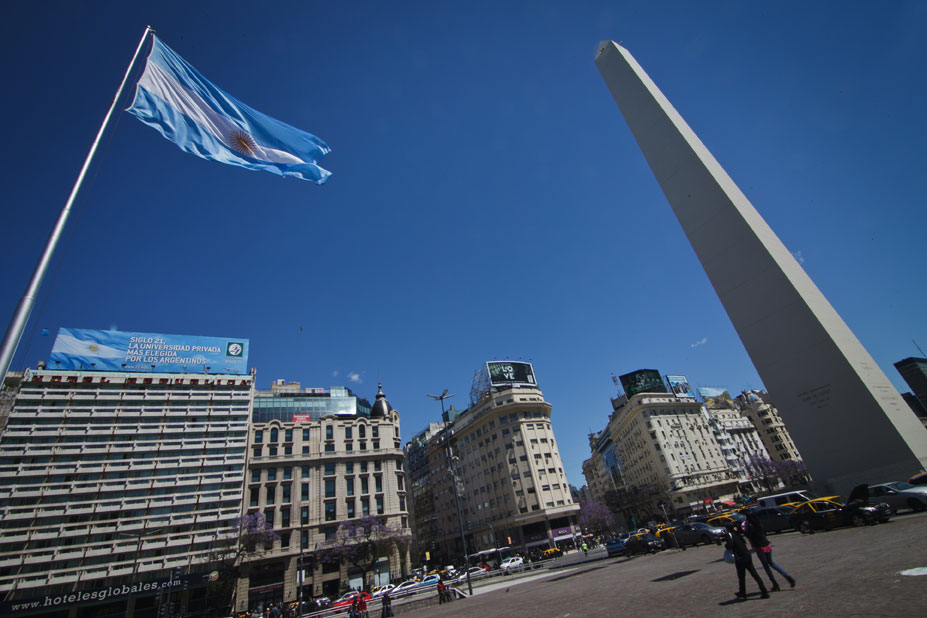 After taking the typical pictures, walk to Presidente Roque Sáenz Peña Avenue, known by locals as Diagonal Norte. This shortcut has its own merit, beyond being the quickest way to get to Plaza de Mayo; you will look up to feel surprised with the facades and domes, some of the most imposing buildings of Buenos Aires.

Plaza de Mayo was designed as an oasis of palm trees to rest from the turmoil of the city. But nearly a century ago, became the stage of the great political and social battles. Every Thursday, for example, you´ll find the Mothers of Plaza de Mayo with their traditional white scarf, worn by them since the last military coup (1977), claiming for political disappearances, but that's another story we´ll tell you later.

From the square you'll have the best view of Casa Rosada (The Government House), seat of the national government. If that balcony in the middle rings you a bell, it´s because from there Madonna performed Evita (in the film that bears her name), the most important and influential Argentine women of the twentieth century. She and her husband, Juan Domingo Peron, gave speeches from the balcony to the great mass who gathered to listen. Until today, "to meet at the square" is a sign of political strength. 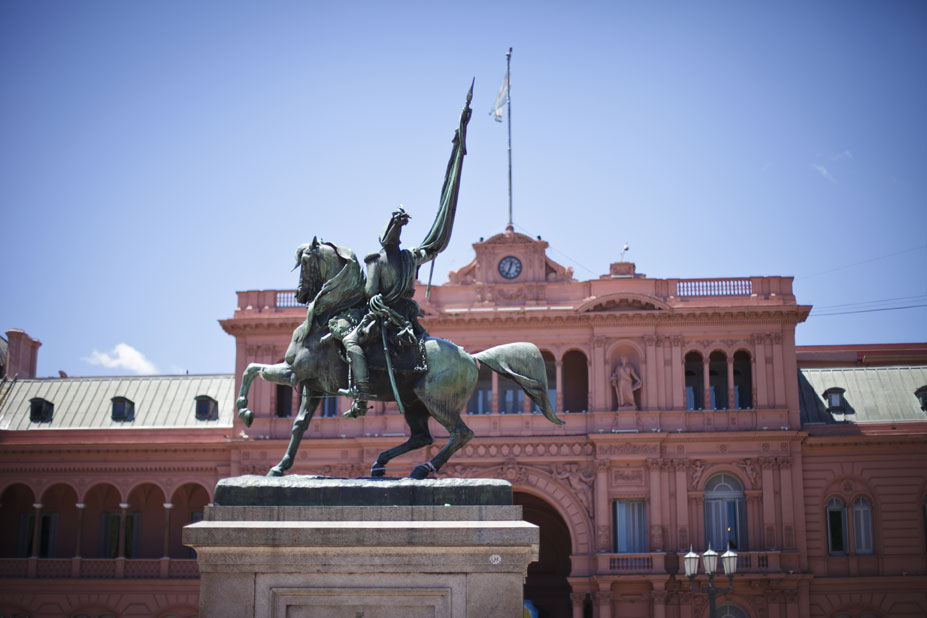 Yet Casa Rosada is not the only symbol of power in this area. The Cabildo, the National Bank and the Metropolitan Cathedral also erect around the square, with all its unsettling architecture: At the Cathedral, until recently, Pope Francis, who used to be Cardinal George Bergoglio-presided the masses there. Today, the Museum of Francisco is a highlight, like the Mausoleum of San Martín, which can be found in the Cathedral.

If you want to continue with the tour, you´ve two options: go shopping to Florida Street, ending at the Galerias Pacifico Mall -the favorite for travelers-; or delve into the history of Argentina following Avenida De Mayo, one of the most important streets of the city. Old Churches, traditional coffee stores like “Cafe Tortoni” and unthinkable buildings (including the amazing Palacio Barolo, inspired by the Divine Comedy of Dante Alighieri) will keep you entertained until reaching the National Congress.

This trip is really a must, and confirms that the best way to know this neighborhood is walking slowly. However, if you need a break, you can challenge your luck on the subway “A”, the oldest line in Buenos Aires, to see if you find one of the original cars made of wood which, moreover, are the oldest still in use worldwide.

The National Congress has a lot to appreciate, starting with its structure almost copied from the United States Congress. Its tours are free! And they´re very interesting and include a guided tour of some quirky spaces in their design and ornamentation, as its amazing book store. At the exit, you can´t miss the tearoom “El Molino” -today closed-but for many years was the meeting point of great national figures like Nini Marshall and Carlos Gardel.

Just when you thought the journey was over, we offer you something unusual: take Callao Avenue, turn right onto Corrientes Avenue and walk until reaching your starting point, the Obelisk ... Or even walk on up to "El Bajo" (marked by Leandro N. Alem Avenue). We suggest you this because when business hours end and office workers are no longer Downtown, a new face appears in the neighborhood. It´s the face of the colorful canopies, of book stores open until the wee hours of the morning and of the pizza stores always ready to serve you a delicious piece of mozzarella and fainá. Do not miss this experience: one-time, you will feel like you have the whole city for you. It's amazing! It's true.

WHAT´S HAPPENING AROUND Centro?
VIEW ALL
PLACES TO GO IN Centro
VIEW ALL