Ten reasons to get lost at Teatro Colón

Perhaps it would be enough to say this theater is one of the best opera houses in the world, but fortunately has so much more to be remarked. If you´re planning a visit, don´t hesitate: know the ten reasons why Teatro Colón is a must.

Even from far it's a show. Set in the ever busy Avenida 9 de Julio, Teatro Colon appears in the distance, a mirage. How can a building of so delicate elegance remain unruffled amidst the urban chaos? Just some fog to look like its façade is simply a hologram ... However you approach and see with your own eyes that it’s real, splendid as the day of its inauguration, May 25, 1908.

2. BECAUSE IT INVITES YOU TO A JOURNEY THROUGH TIME

Unless you go to see a show, you won´t be able to cross the stunning main entrance on Libertad Street. But just as magic is to enter the Tucumán Ride Carriages, where you can buy your pass for the tour. This entry used to be for the floats where the Buenos Aires elite came, and still remains vestiges of that golden era with the stone floors and vaulted ceilings. And this is just the beginning.

Do not miss this article: TRAVEL THROUGH TIME: SIX RESTAURANTS WITH OVER 100 YEARS OF HISTORY

3. FOR ITS LEGEND FLAVOR

The first architect, the Italian Francesco Tamburini, died at age 44 before beginning construction. Second, the Italian Vittorio Meano, was killed at the same age, leaving the work in half. That particular match has raised some all kinds of theories about the curse of theater-until there were those who threatened to demolish it-. Fortunately, the Belgian Jules Dormal plucked up courage and, 20 years later, the construction was completed.

4. TO FEEL A VIP GUEST AT THE GOLDEN HALL

Symbol of Buenos Aires aristocracy attempt to imitate the European nobility, could be an extra room in the Palace of Versailles. Decorated chairs, stools, tables, chests, vases, pictures and mirrors the style of Louis XV, the Golden Hall was one of the VIP strongholds of Buenos Aires. Today, the hall is used to perform master classes, lectures, talks and chamber concerts, usually with free admission.

5. TO GO IN THE FOOTSTEPS OF THE GREAT MASTERS 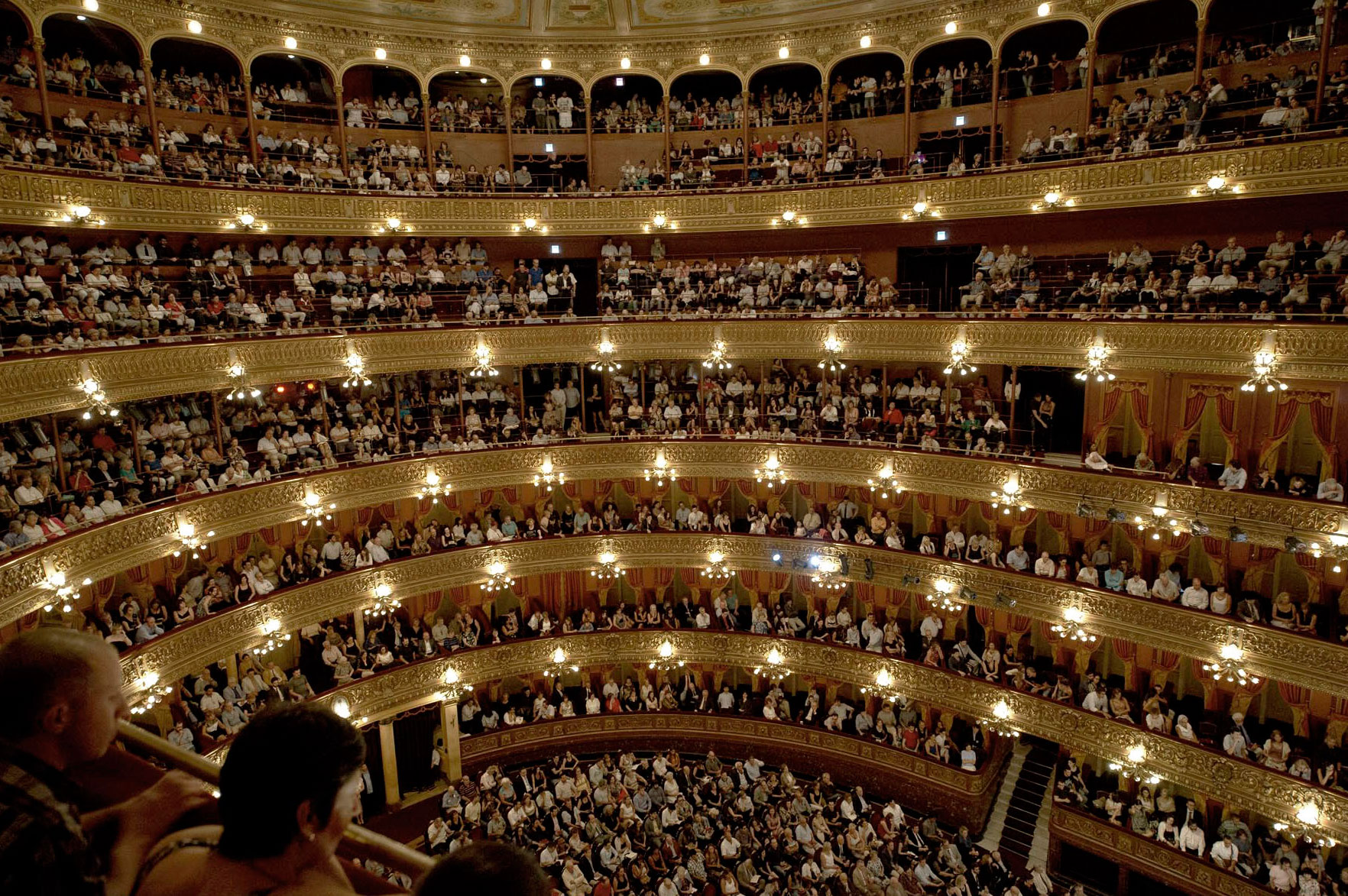 Do not miss this article: WHY PLAZA DE MAYO IS THE ARGENTINE SQUARE?

6. TO FEEL ITS DOME IS A HEAVEN ON EARTH

Finally, you enter the main room. Everything is majestic and spectacular, but nothing grabs your attention more than its dome; 28 meters separate you from that masterpiece composed in a perfect circle. The representation of the theater as described by the famous Argentine artist Raul Soldi revolves around a brass chandelier with 700 bulbs which provide a formal but warm light. An image that will be recorded in your mind forever.

7. BECAUSE ANY REHEARSAL IS A CONCERT

A musician tunes his violin, while another leaves his lectern. When the director enters, all is silence until finally the show begins... But no, not a concert, but "only" a morning rehearsal, and you have the luck to be there to listen! The only difference is that the members of the orchestra are dressed in everyday clothing. Otherwise (music, concentration, noise) you could be witnessing the gala premiere. With the almost empty room, there´s no doubt you're witnessing a unique moment.

8. TO VERIFY THE MASTER ENGINEERING OF ITS ACOUSTICS

It´s not only the horseshoe shape of the room, but mostly about how the use of the materials is thought to enhance the sound. Of the seven levels of the room, in the lower three, soft and absorbent as wood and fabric elements predominate. However, from the fourth level to ceiling materials are hard, like marble and bronze. The combination of extremes allows sound to be absorbed on the one hand and on the other reberbs. The result: one of the five best acoustics in the world, along with La Scala in Milan and the Operas of Vienna, Dresden and Paris.

9. FOR ITS WELL-KEPT SECRETS

There are small details that make up the mystique of the theater. Did you know that sometimes a musician hide inside the chandelier, to create "sound effects" from the high? Or that the building has underground costume, shoemaking, hairdressing, tailoring and upholstery workshops? And such a paltry thing as lovely, if you enter from the foyer (main hall) and take the stairs on the left to take you to the balcony boxes and high balconies, count ten steps and see towards the marble railing, can you find the shape of two shells? They are fossils that were embedded in the marble brought from the coast of Portugal.

Do not miss this article: HOW TO REALLY KNOW THE MOST EMBLEMATIC BUILDINGS OF BUENOS AIRES?

10. BECAUSE, WHEN YOU FINISH THE TOUR, THE MUSIC WILL CONTINUE PLAYING

Lost in Teatro Colón also means lose track of time and stay suspended in an eternal moment ... as if you walked into a parallel universe where there is the most perfect art. Back in the real world it´s very possible you come across Plaza Colon with its monument stands and giant piano keys. And if suddenly you feel a melody floating in the air, don´t worry: you turned not crazy, it's the sound installation of the park. Music must go on!

PLAN YOUR VISIT TO TEATRO COLÓN